Together, we breathe life into buildings. Contact us today. 01403 886508
Menacing methane – methane is a greenhouse gas thirty times more potent than carbon dioxide 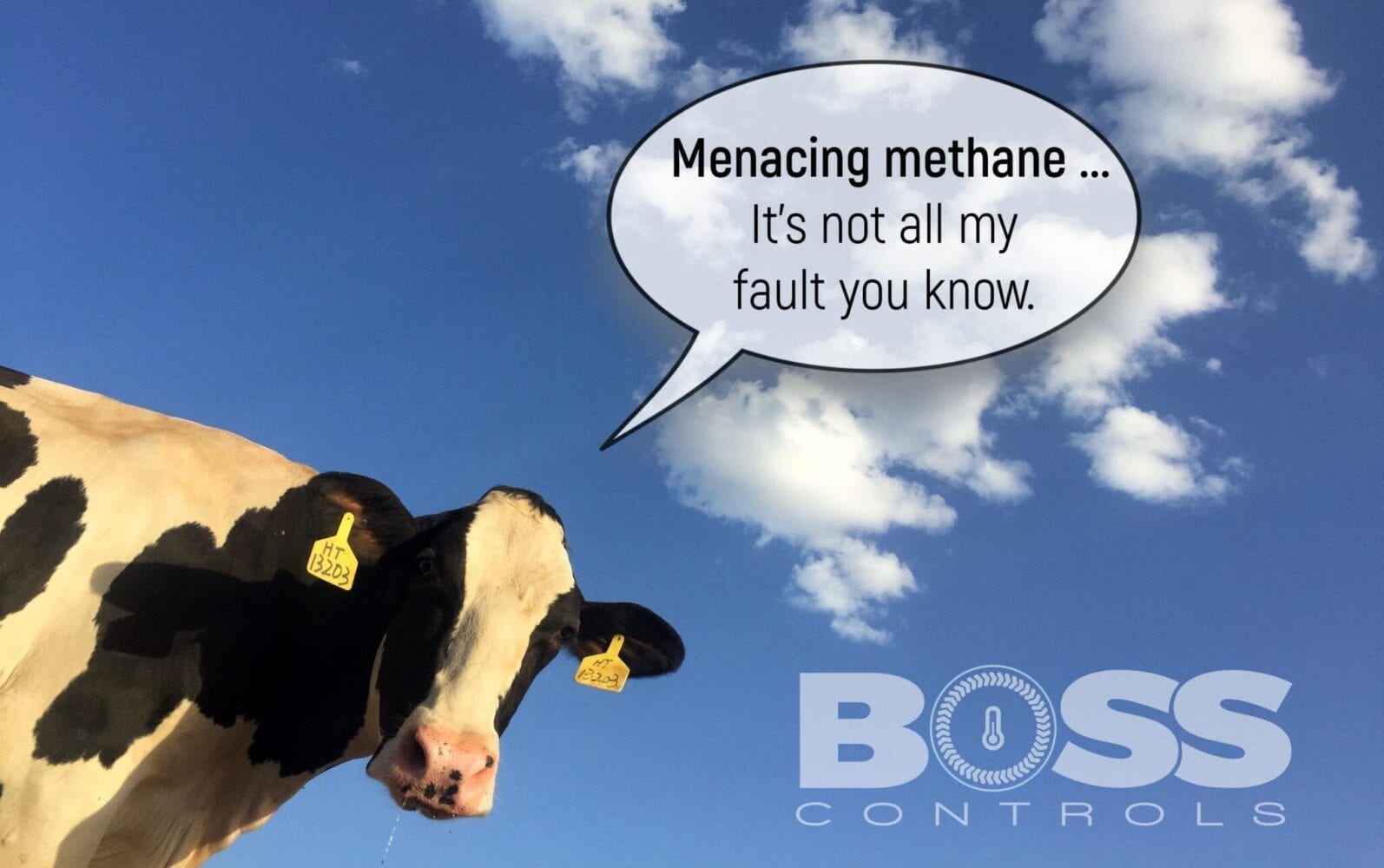 As you probably know, the team at Boss Controls is continuously learning about all things technical and environmental. We help our clients to reduce their energy consumption and carbon footprint – naturally we are interested in learning what else we can do to protect our precious planet.

While carbon dioxide is commonly reported to be the evil greenhouse gas, we have recently learned that methane (MH4) is approximately 30 times more potent than carbon dioxide (CO2). Methane comes from natural sources, such as wetlands and animal digestion, along with thermogenic sources, including oil and gas production.

Our insatiable appetite for red meat means that livestock accounts for approximately 18% of human-caused greenhouse gas emissions, producing 40% of the world’s methane emissions; this is more than the transportation sector. Through burping while regurgitating, a cow releases between approximately 70 and 120 kg of methane per year which, in weight, is the equivalent of 200 pairs of leather court shoes.

The issue is so worrying that In Argentina, systems are being developed by Argentina’s National Institute for Agricultural Technology (INTA) to extract methane from cattle. A bizarre methane collecting solution was published in 2014 showing cows wearing extraordinary backpacks to collect methane from a tube running via the animals’ stomachs.

Thankfully, we have discovered that there is a more humane way of solving the problem which is mixing feed with a compound called 3-nitrooxypropanol (3NOP), may reduce the methane in cow burps by up to 30% – we hope with continued research that it won’t be long until this percentage increases

Methane from wetlands and rice paddies

Research indicates that microorganisms dwelling in lake sediment and freshwater wetlands and rice paddies are  releasing biogenic (bacterial) methane into the atmosphere and the problem will get worse as temperatures rise and the size of flooded land increases. In freshwater systems, methane is produced as microorganisms digest organic matter, a process known as “methanogenesis.” Using satellite data, resarchers have established that 53-58% of the world’s methane emissions are caused by wetlands and a quarter of this figure is due to rice paddies.

What can we do to reduce methane emissions?

Methane emissions are increasing temperatures and increased temperatures are melting glaciers. Time Magazine reported that there is concern that once the glaciers melt, this will reveal hidden methane which will then be released, making the problem worse. The good news is that methane can be used to create electricity and there are already hundreds of  “methane into energy” sites around the world.

We are not about to preach to our readers to stop eating rice and become vegetarian, however, it is interesting to learn that the current level of livestock accounts for approximately 23% of all global water use in agriculture. It is also worth noting that 1kg of beef generates 6 times more methane than chicken, five times more than pork and twice as much methane as lamb. Albert Einstein said: “Nothing will benefit human health and chances for survival of life on Earth as much as the evolution to a vegetarian diet”.

Now we are armed with this information, we can make informed decisions. What will you do?

If you have no plans to go vegetarian, you can make a positive change by optimising your BMS controls to reduce energy consumption. Call Boss Controls today on 01403 886508 for help with this.

END_OF_DOCUMENT_TOKEN_TO_BE_REPLACED

The Boss Group at The Academies Show

On 3rd and 4th April 2019, Boss Energy exhibited at the Schools and Academies Show, Excel, London. It was an interesting event and we learned lots of new ways in which we can make an invaluable contribution to all stakeholders within the education sector.

END_OF_DOCUMENT_TOKEN_TO_BE_REPLACED

Boss Controls and The Circular Economy

END_OF_DOCUMENT_TOKEN_TO_BE_REPLACED

Welcome to our festive blog to help keep you green while enjoying some festive fun. It's a time to eat, drink and be merry. Now you can have your 'elf' a merry little Christmas with a clean conscience!  Should you fake it or go real? We are referring to...

END_OF_DOCUMENT_TOKEN_TO_BE_REPLACED

Grand Challenge: Reduce your energy reduction now
In May 2018, the Government published its Grand Challenges which cover many areas including health, the ageing population and of course energy reduction. Boss Controls optimises Building Energy Management Controls (BEMS), therefore, this blog focuses on the Government’s Clean Growth Challenge which is to:”At least halve the energy use of new buildings by 2030″.

END_OF_DOCUMENT_TOKEN_TO_BE_REPLACED

How long does an HVAC system last? | Super-BMS saves another life!

Learn how BMS controls can prolong the life expectancy of your HVAC plant equipment As you may know, benefits of BMS control systems include managing energy consumption, boosting employee productivity and improving wellbeing of building occupants. What you...

END_OF_DOCUMENT_TOKEN_TO_BE_REPLACED

Do we use more energy in the #BeastFromTheEast or in a #HorrificHeatwave?

As much of the UK is consumed by #Snowmegeddon, our focus is on staying warm and perhaps the expected rise in our energy bills this month. What consumes the most energy? Is it heating or artificial cold? The answer is determined by these five points: The number of...

END_OF_DOCUMENT_TOKEN_TO_BE_REPLACED

Five ways in which Boss Controls is integrating the Government’s 25 year Environmental Plan into its business practices.

Boss Controls has read and digested the 25 year Environmental Plan and has found five ways in which it is already implementing elements into its business practices. This is helping clients and Boss Controls' to protect our beautiful planet. Where sections of the 25...