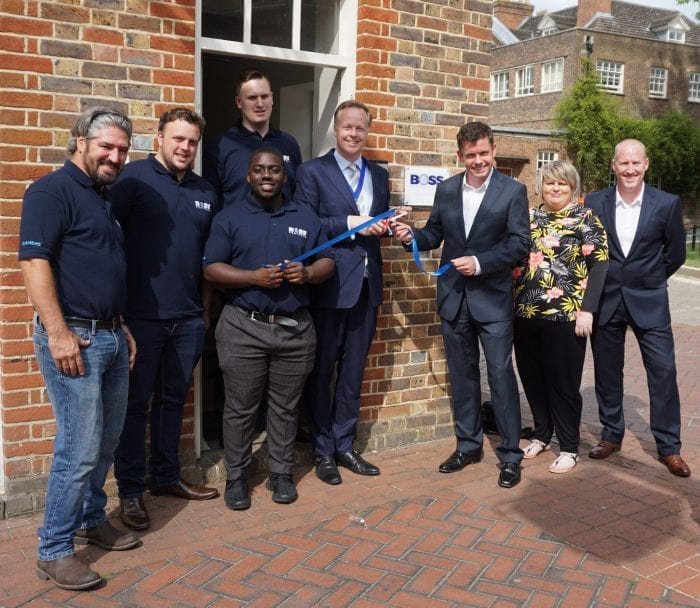 Based in The Stable Block, Horsham Park, Boss Controls (previously Carrob Controls) has been trading since 2010, employs ten people in and around Horsham and is growing quickly. BOSS Controls helps organisations to save energy consumption and reduce their energy costs by optimising Building Management Systems controls (BEMS), mainly Trend Controls, who are also based in Horsham.

Former Chairman of the District Council Cllr Mitchell, said: “I was delighted to launch the rebranding of Boss Controls.  Boss Controls is one a number of small and medium sized companies based in Horsham and our district that are the lifeblood of the local economy. With their leadership, I know they will continue to grow and employ more local people”.

Managing Director, Mark Berwick said: “This is an exciting time for the building automation industry and in particular for the Boss Controls team because we are playing a significant role in helping the UK to increase its productivity levels at an important time. Horsham is a fantastic location to work in with easy access to London and other key areas we serve in the UK.”

We are helping to increase the UK’s productivity: The UK’s productivity is currently 18% below the average level of other members of the Group of Seven advanced economies (Weldon D, 2016). Much of this is down to an unsatisfactory workplace environment including temperature and air quality. Did you know that productivity (smart working) increases when employees are working the correct temperature of between 18 and 24 degrees Celsius? According to the Stoddart Review, a 1% productivity gain (in the UK), achieved through a comfortable workplace environment, would add almost £20billion to our national output. This could reduce the annual government deficit by approximately £8bn and increase annual profits across the country by £3.5bn.

We help organisations to grow their brand by improving employee engagement: Only 27% of employees are satisfied with their workplace temperature and 34% are satisfied with the air quality. There is a high cost associated with unhappy employees, mainly being cost of high staff turnover and the cost of recruiting and training a new employee is approximately £30,614 per employee (Oxford Economics). Being too hot or cold forces employees to switch to survival mode, reducing their concentration and increasing stress levels. What is the cost of having an irritable member of staff representing your organisation.

We are improving employee wellbeing: Working in the correct temperature offers essential health benefits reducing the number of sick days which all help to boost the bottom line. The National Human Activity Pattern Survey states that we live more than 90% of our time in doors in strictly controlled temperatures which is prevent our blood vessels from constructing and expanding sufficiently. Being too hot also increases irritability, loss of concentration and ability to do mental tasks effectively.

Boosting the retail sector: How many times have you been shopping and the stores are simply too hot to think clearly, let alone trying on a new outfit; imagine working in those temperatures. The cost of overheating stores is costing retailers £millions through lost sales and wasted heat with entrances being wide open to the elements. Boss Controls is working with shopping centres across the UK to manage their energy and make life more comfortable for employees and customers.

About Boss Controls
We currently employ 10 people in and around Horsham and are growing quickly. We service Trend (also based in Horsham) and Siemens BMS Controls for organisations within healthcare, education, industrial, entertainment, retail, museums and galleries.

END_OF_DOCUMENT_TOKEN_TO_BE_REPLACED

Building Energy Management System (BEMS / BMS) Celebrating the history of the heritage buildings we work in for #LocalHistoryMonth.

END_OF_DOCUMENT_TOKEN_TO_BE_REPLACED

We are excited to announce that Boss Controls has recently achieved the highest status within the 2021 Trend Controls’ Partner Programme: a Trend Technology Partner.

END_OF_DOCUMENT_TOKEN_TO_BE_REPLACED

The Trend Xtend/24V is shortly to be discontinued. What does this mean for your business? The Xtend/24V enables older BMS controls’ networks operating on the IQ system current loop LAN, Ethernet, and Lonworks bus to be integrated into a single network. It also enables...

END_OF_DOCUMENT_TOKEN_TO_BE_REPLACED

We are proud to announce that our Technical Director, Rob Wood, has recently been appointed as BCIA Skills Working Group Chair for the Building Controls Industry Association (BCIA). Rob has been the Technical Director at BOSS Controls for eight years and is...